Lovely & wild Miss Magaly is throwing a party! Witches in Fiction 2014 is live :) Blooming Howls is roaring away.  I am much more of a visual person (esp. when reading) &, unfortunately, not much of a writing type person.  However, Magaly, & my dreaming fox, rise what little verbal skills I have to the top.

Here are my few words, inspired by a sleeping fox & howling winds: 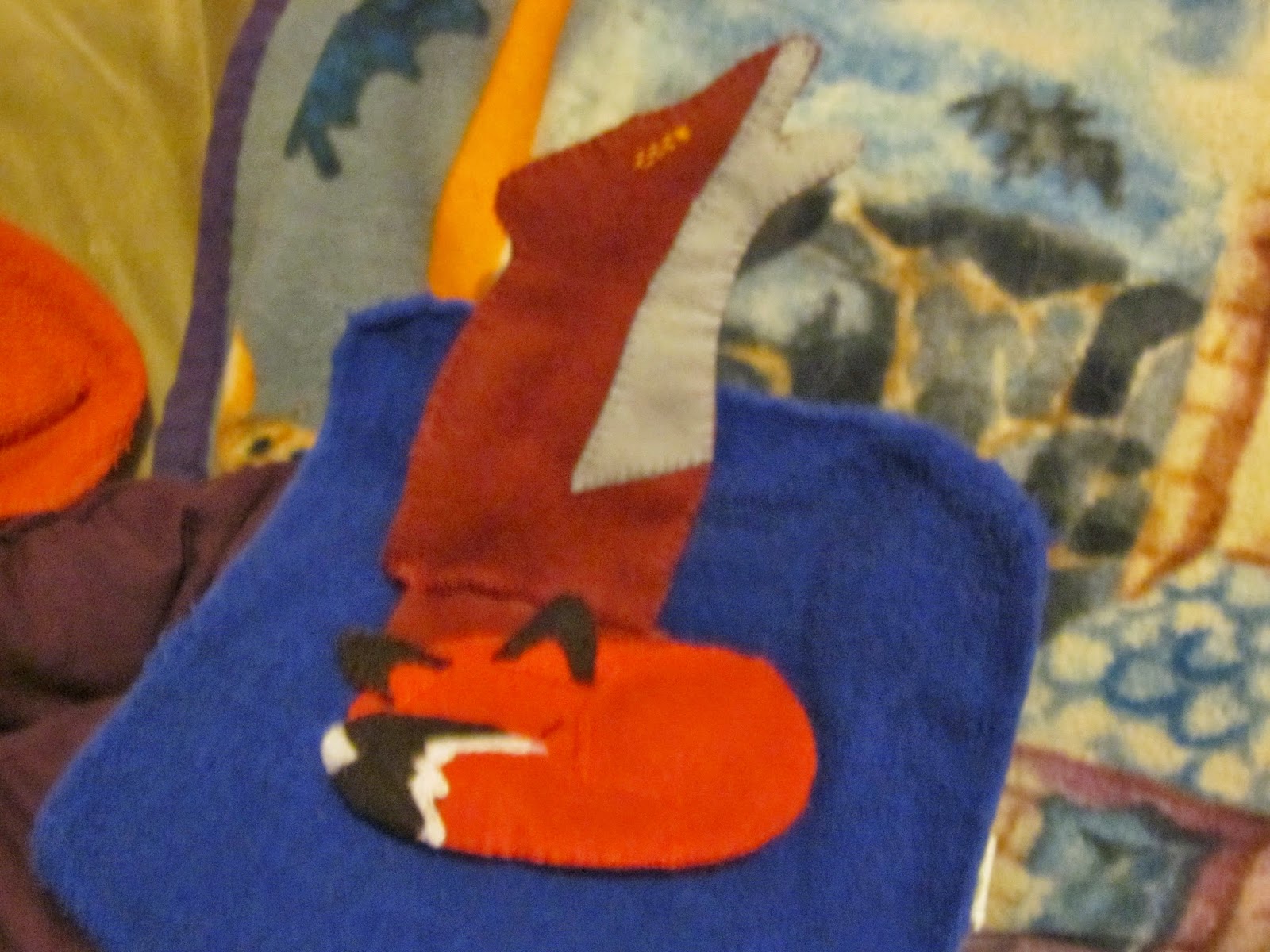 The back shadow fox is a much darker red & grey instead of white. The shadow eye is 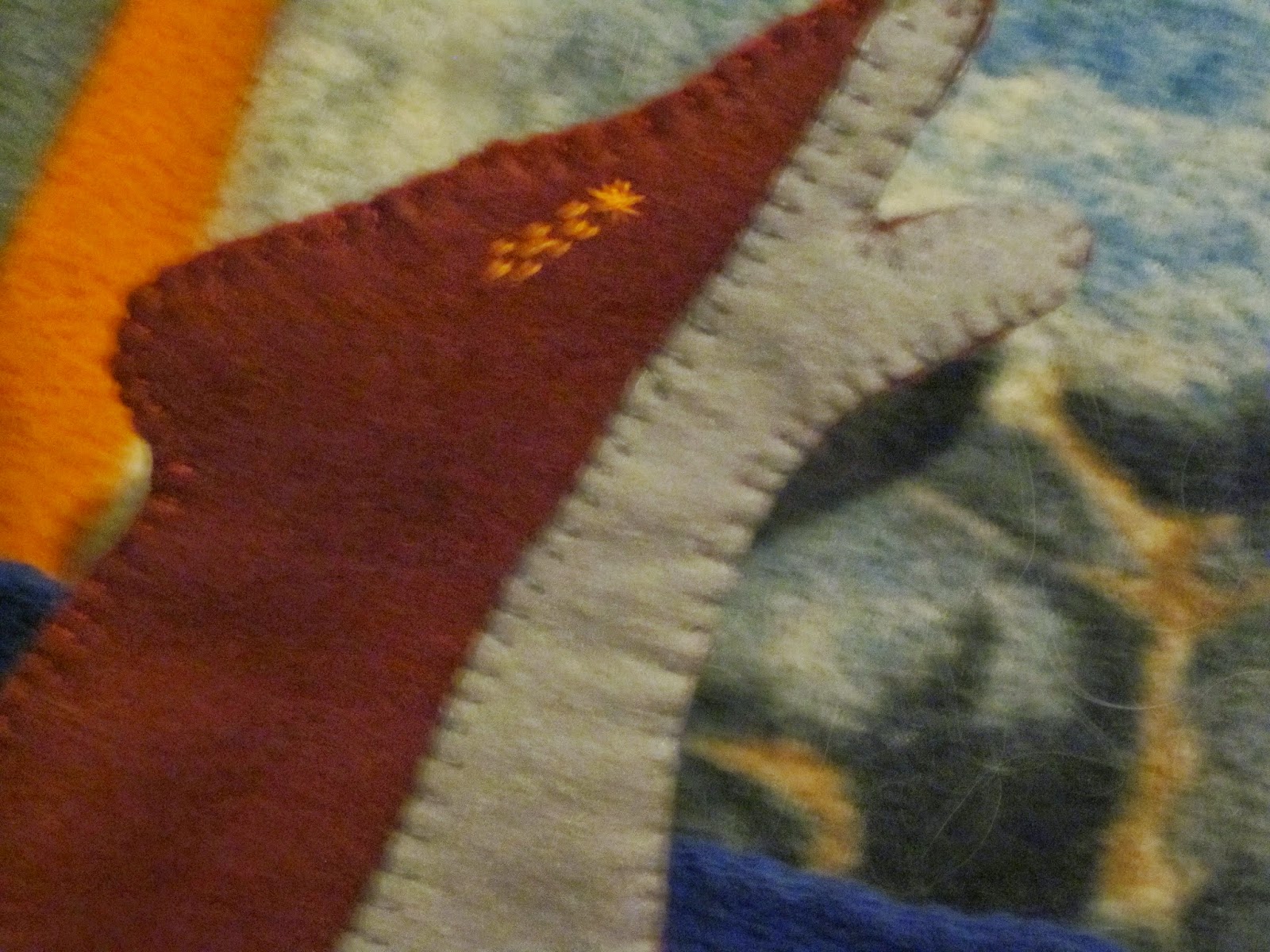 a blazing star. Will the dream howling be enough to wake the dreamer? 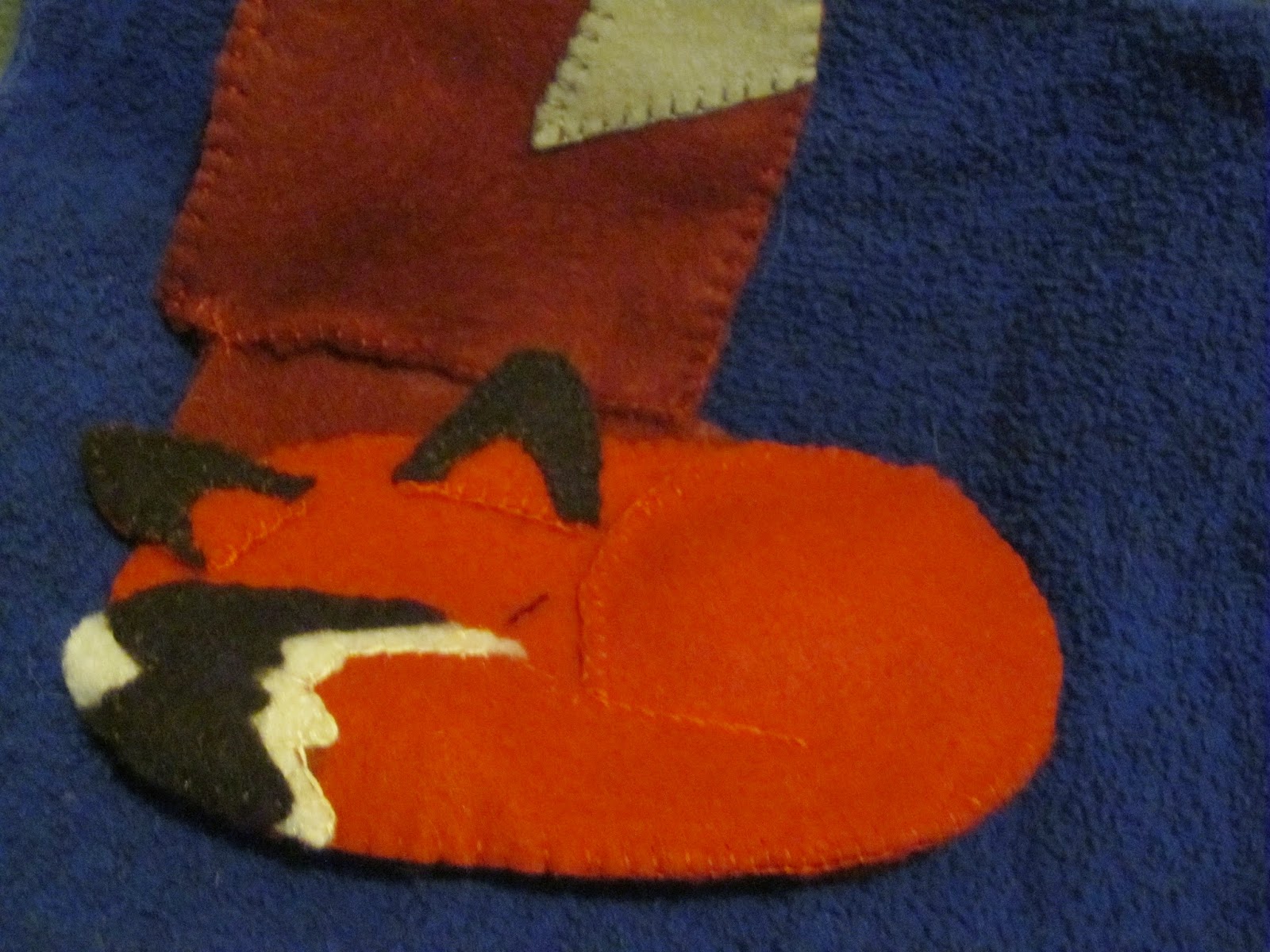 So much crap energy flying around.....

Some days it seems that there is so much crap energy flying around, that it makes a person ill trying to block it.  As usual, Gordon says it much better than I ever could:   Nobody Promised You a Life Unoffended .

In the meantime, I will be doing a bit of cross-stitch (such a soothing motion) & trying to cut the fog long enough to post some pics.

Aham Prema.
Posted by petoskystone at 10:13 AM 4 comments:

Yea, it's been awhile.

Well, October of last year was the last official visit. Been awhile, huh?  Don't know that much has actually happened since last we spoke.  One medical issue has been resolved (abnormal uterine bleeding...who knew that if you lost enough blood, it might affect your heart? hence, I received my first blood transfusions).  New glasses, working toward getting a left knee replacement.

Won some knifty giveaways, photos on Thursday.  Tried my hand at rearranging my wee personal space & discovered that until more sewing is completed, there isn't the room to actually rearrange.  Read a few more books, including books 3,4,5 of Game of Thrones. Which won't be featured on Sat. Quotes/Visual as I didn't actually read them through. Rather, I skimmed most & read what chapters pertained to the characters I am interested in: Arya, Danny, Robb/Mom, Bran, Hodor, Tyrion, the dragons & the direwolves.  Suffice to say, I am really irritated with Danny.

Turtie the turtle is growing nicely. Alex the fish has been added. I started a part-time job, but got my hours eliminated almost 3 months ago (budget cuts a/k/a they fired the person who hired me).

For Memorial Day, I present:
a coat of dog tags

The poem it inspired:
Dogs of War

The person it reminded me of:
Fallen

The saddest song ever:
Day is Done

Posted by petoskystone at 5:43 PM 3 comments:

Ah...The Wizard of Oz. One of my all time favorite reads, in all of it's incarnations. When I first read of the Hues theme the first color that popped in was Ruby. Those Ruby Slippers, which, as those who have read the book know full well, are actually Silver Slippers.

Which lead to my second thought: other than the iconic Ruby Slippers, an image forever linked with Oz are those Flying Monkeys. Who, by the way, Oma Linda, have a bum rap. They may look frightening, but they aren't scary. They are, instead, controlled by a cap. Whoever possesses the cap, controls the monkeys. Since the Wicked Witch has the cap, they reflect her meanness. Once Dorothy had the cap, she nicely returned it to the head Flying Monkey & they went on their way.

So..here is my take on these iconic images of Ruby & Flying Monkey: 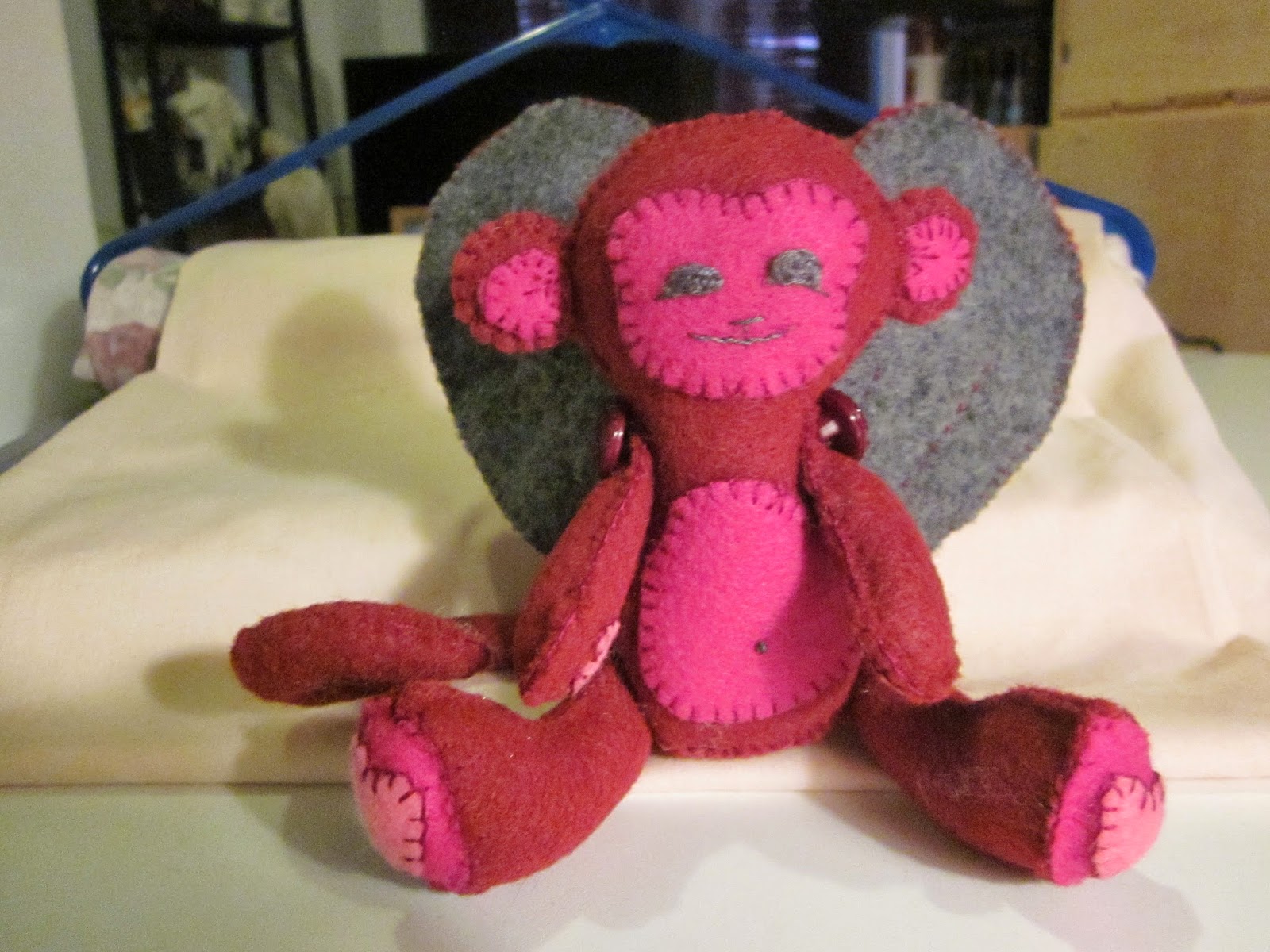 Please note the pleasant expression, waiting to hear from You Who Possesses The Cap. Also, please note that the reason these Monkeys developed wings is because they have two left feet!

Also, along with Ruby that was Silver, Flying Monkeys who weren't scary, there is the Emerald City which wasn't Emerald. Well, no more than any other city (to paraphrase the Wizard of Oz). The City itself is just a City with Emerald Walls surrounding it. Every one who enters it is required to wear green eyeglasses before passing through the walls. Hence, 'Emerald City'. Just one more of the Wizard's Humbugs.

Music! for All Hallow's Grimm

Today, Magaly's  question is "Share the title of a song that becomes your gentle light when darkness threatens to blind, and turns into your soothing darkness when the light promises to burn."

Turns out, I have a few! Here they are:
Nummer eins is always   Dvorak: Symphony #9 'From the New World'
This is closely followed by Carl Orff: Carmina Burana , 'In the Hall of the Mountain King' (Peer Gynt) , Respighi 'Pines of Rome' , Smetana's Ma Vlast (part one) , Smetana's Ma Vlast (part 2) , Corvus Corax 'Fortuna' ,
& Corvus Corax 'Ragnarok' .

When I need a quick laugh, I turn to one of my newest happy songs: That's the way I like it .  The clip is long because context is important! :)

Now, when the brightness burns to much, anything by Rammstein (played esp. loud) gets my shadows laughing & dancing!

What sweetness blooms in my darkness

*waves hello furiously* to the wonderful participants in Magaly's All Hallows Grim 2013 !

While some may insist on the dark/scary & light/good, I find that light & dark complement each other with their presence. Candle flame burns brighter against darkness while the moon's glow throws velvet darkness into sharp context.  That sentence comes close to the feelings in my heart (that also, life sustaining heartbeats work best within the comforting folds of a darkened interior).  Since words do not always match my thoughts, I present what represents the sweetness I find within my darkness. 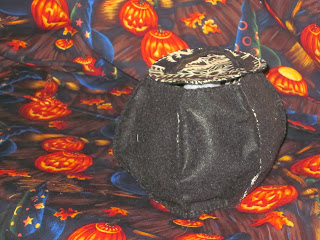 This little felt pot is for my sweet Darkness, comfortably held within my heart. (Sorry about the photo quality...lighting really sucks in this apartment!) 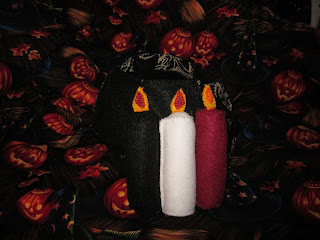 Lift the lid, &, most especially during All Hallow's, I find the three candles representing Guidance (from the seasons, from the winds, from the ancestors...black, white, red). 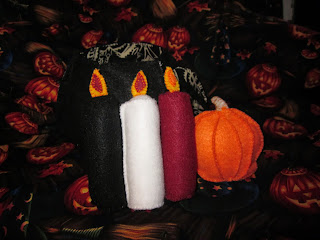 Guidance is followed neatly by Pumpkin, for prosperity of mind & body. 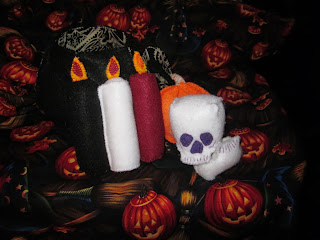 Prosperity is always sweetened when Company is there to enjoy it. (Sugar skull decorations are all well & good, but sometimes there floats in a more Masculine air, which prefers simplicity in adornment) 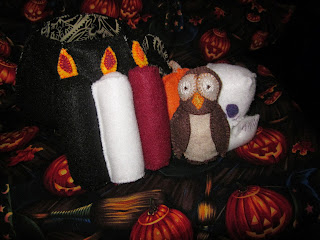 Wisdom flies out, to join the company. There are times where Guidance & Company champion themselves far too loudly, & Wisdom is there to help settle matters ;) 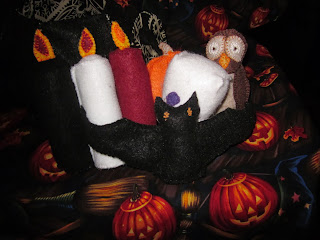 Last, but never least, Bat brings good luck! Good luck for this year coming & bestest luck for all who welcome him with open arms!

This, then is the Sweetness within my Darkness. :)
Posted by petoskystone at 4:33 PM 8 comments:

Back for Magaly's Hallow's Grim mid-evening. Figure it will be that long before I get this 'shortcut' that has been installed on this laptop to work for me properly.....
Posted by petoskystone at 7:24 AM 2 comments:

german word of the day

petoskystone
one daughter, 3 grandchildren, home-based childcare due to chemical-allergies, starting to lose the last 40 pounds. pleased to have the companionship of cats & dog.